Riana Lucas is a pair of YA fantasy authors and full time moms who have been writing for almost two years.  They live in Florida with their families.  "Riana Lucas is a duo of writers, who are best friends, who go by the names Nichole and Angela in the real world.  Realizing that gobbling books like hungry caterpillars and then discussing them for hours at a time wasn’t fulfilling enough, the team decided to write their first book together.  The Deadly Flowers Series was born out of a kernel of an idea and has grown into a three book series—so far.  The two have realized their true calling in life and plan to make a career out of writing books with strong characters that evoke true emotion."

They draw inspiration from all the authors, writers, and novels they have read and loved over the years.  "We aspire to write stories that are different from some of our favorites.  While we have enjoyed the books we’ve read, we always felt like some of them could have gone another way…so we have decided to go our own direction."  Two of their favorite authors are Kim Harrison and Richelle Mead.

The Deadly Flowers Series is currently made up of three novels - Poppy, Poppy: Awake and Poppy: Revealed.  Poppy: Revealed was just released on June 12, 2012. 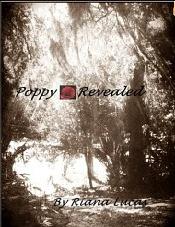 (description from Amazon)
Poppy: Revealed begins with Poppy and her friends locked in battle with the Unseelie Court who have stormed the Seelie Castle interrupting Poppy’s Coronation Ceremony. After Damien’s attack, Poppy finds herself fully entrenched in planning for war with the Unseelie Court. While out for a walk, Poppy is encountered by a mysterious Golden Fae who is also Unclaimed. Interestingly enough, the Golden Fae is capable of tamping down the violence of the disease. Meanwhile, Reed asks Poppy to take him back to the Human World to visit his mother forcing her to fulfill her promise to him.

Will Reed decide to stay in the Human World? What does this dangerous Golden Fae want with Poppy and the Seelie Court? How will Poppy plan, train for, and execute a war with the Unseelie Court? (end)

Riana Lucas's novels can be found on Amazon.  Have an author to nominate?  Send me a message via Twitter (#ANSA), Facebook, or leave a comment with the author(s) name and contact information.  I'd love to add new members!  Happy Reading!
Posted by HilyBee at 12:00 AM